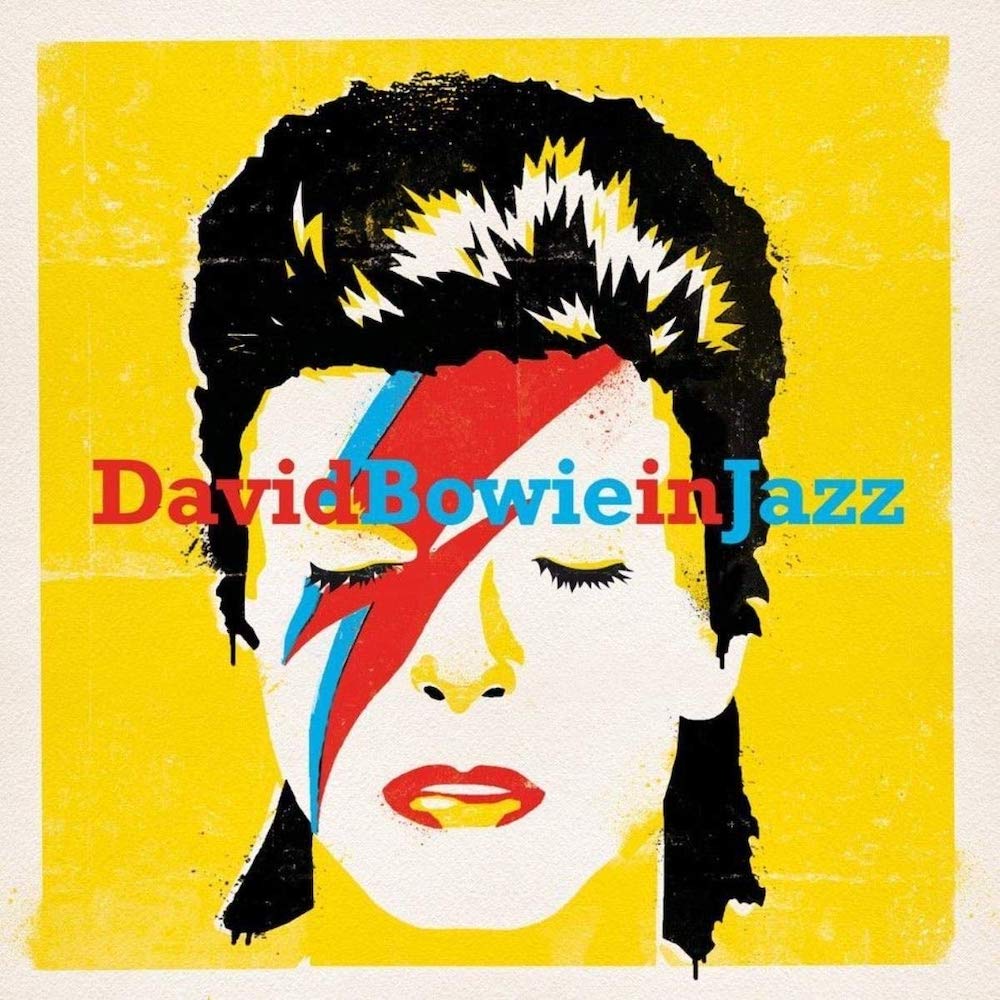 “David Bowie in Jazz"'s Aladdin Sane-era cover art might lead you to believe this Bowie tribute record is tied in with or is somehow connected to Bret Morgen’s feature-length "Moonage Daydream" documentary released September, 2022 in IMAX and standard theater formats and currently available for streaming and purchase on Amazon, itunes and other sites.

The scant credits, however, indicate that the French Wagram Music label marketed and distributed the “180 Heavyweight Gram Vinyl” record, subtitled “A Jazz Tribute to David Bowie” in 2020. The album only recently showed up in the bins of a New York record store, suggesting that American distribution caught up, or a buyer grabbed anything from an import catalog with the artist’s name attached to it.

The album’s ten tracks, all Bowie repertoire staples delivered with a seamless, non-irritating smooth jazz vibe, does not disappoint. About half of the songs feature Corrine Bailey Rae-like vocals, while the other half are sparsely arranged and feature a lead instrument.

Except for Jen Chapin, daughter of the late Harry Chapin, I was unfamiliar with the ever-changing cast of mostly European English-singing chanteuses. More complete production session notes—beyond the artist and song—would have been a nice inclusion to let listeners know who was responsible for the compelling music found within the quiet, well-pressed and noise-free grooves.

A varying cast of artists—mostly mellow small combos plus vocals— performed the tracks over the past decade in studios throughout Europe. The result is a natural, you are there dynamic sonic experience with soloists having the opportunity to add textures pleasingly spread throughout the stereo mixes. 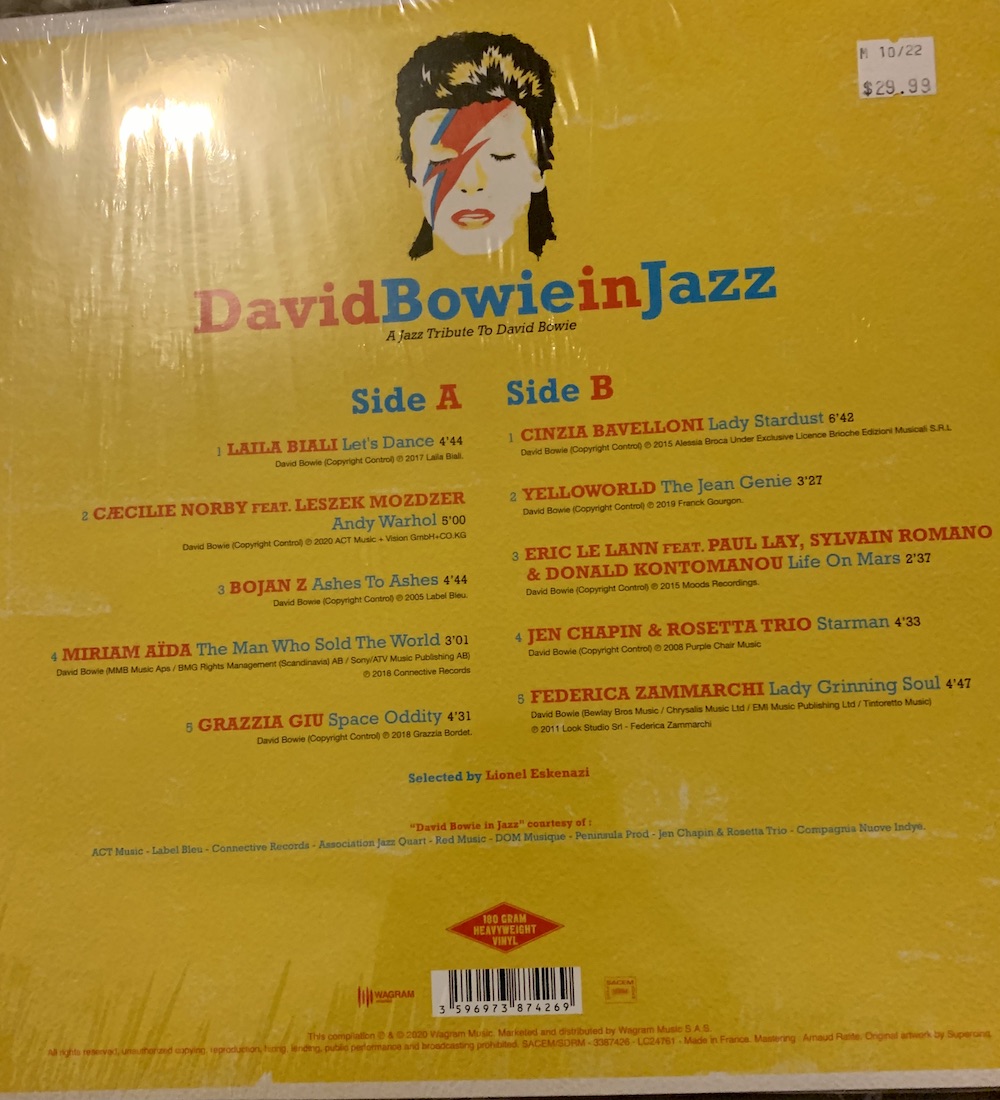 Jazz pianist, songwriter and vocalist Laila Biali from Vancouver, Canada, kicks off the album with a ten second percussion beat and a few bass notes that welcome her sultry, slower version of “Let’s Dance” compared to Bowie’s more familiar “peppy” one. Much of Bowie’s repertoire is similarly deconstructed by the other vocalists whose phrasing makes easy paying attention to and appreciating the lyrics.

On “Ashes to Ashes”, Franco-Serbian jazz pianist Bojan Z, backed by a telepathic, foundation setting rhythm section shows off his keyboard skills, riffing on the natural solo opportunities waiting to be plucked from the composition. The band remains faithful to Bowie's opening-bar arrangement, followed by some improvisations that bounce between the speakers. A barely audible voice, presumably Bojan's, meditatively whispers unintelligible works Keith Jarrett-like, that perhaps a state-of-the art system might be able to decipher.

Beautifully supported by a jazz combo, Danish jazz and pop-rock vocalist Cæcilie Norby provides a more bluesy take on “Andy Warhol,” talking more than singing her way through the verses and singing and scatting through the choruses.

Swedish jazz singer Miriam Aïda brings a bossa nova feel to “The Man Who Sold the World,” a reading very different from Kurt Cobain’s ominous “MTV Unplugged in New York” performance. We travel through the cosmos on a slow “Space Oddity” take with France-based Grazzia Giu, who received her classical music training in Belgium.

Taken from Italian singer Cinzia Bavelloni’s 2015 all-Bowie cover album Change of Changes, her version of “Lady Stardust” is supported throughout by vibes punctuated by a beautiful trumpet solo.

In 2020 the French group YelloWorld released its own tribute album Alaskan Dream: a Tribute to David Bowie, from which “The Jean Genie” was culled. It offers a beatnik treatment like one Donovan might have produced.

Jen Chapin returns near the album’s conclusion with the Rosetta Trio on “Starman,” making effective use of her folk roots to deliver a rendition that in places sounds almost like a Disney standard.

Lionel Eskenazi a French journalist who writes for Jazz Magazine selected the tracks, recorded between 2005 and 2020 and licensed from nine parties. Wagram in 2021 released an 18 track CD version that’s also streaming on Spotify.

Eskenazi explained to TrackingAngle that the Bowie title is part of a 15-album series that also includes The Beatles, John Lennon, Led Zeppelin, The Rolling Stones, Bob Marley, Jimi  Hendrix, Serge Gainsbourg, and Bjork, with The Doors coming next. “The idea is to collect and assemble jazz covers of pop songs of famous singers or pop group,” he added.

I have three other vinyl releases dedicated to Bowie that were released since his January 2016 death. Jazz works especially well as a Bowie tribute musical genre, in part because Bowie was himself a fan. For Blackstar he recruited a who’s who of contemporary New York jazz players including saxophonist Donny McCaslin.

Bowie’s main instrument in his teen year bands was saxophone, which he later played on some of his biggest hits, including “Changes” from Hunky Dory (1971); “Soul Love” from The Rise and Fall of Ziggy Stardust and the Spiders from Mars (1972); and “Sorrow” from Pinups (1973). Just as an interesting aside, another Bowie, the late trumpeter Lester Bowie played on five Black Tie White Noise (1993) tracks.

Larry Jaffee is co-founder/Conference Director "Making Vinyl and author of Record Store Day: The Most Improbable Comeback of the 21st Century