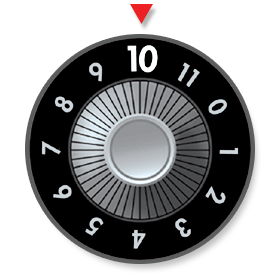 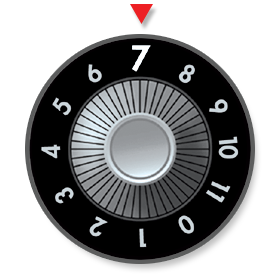 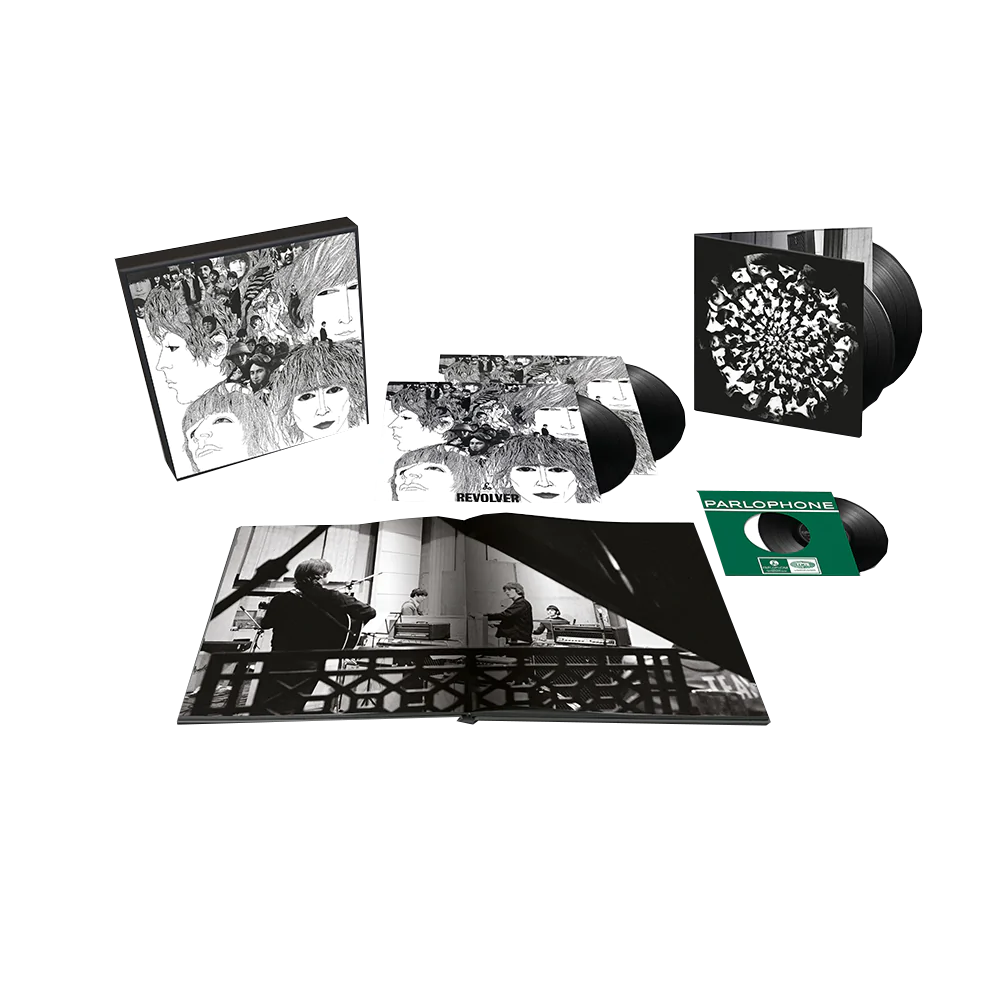 says as much in the indispensible hard covered book

"Welcome Klaus! Come have a listen", George Martin invited. "You can sit in my chair," he said to Klaus Voorman, bassist, artist and long time friend of The Beatles. This and other excerpts from Voorman's graphic novel birth of an icon REVOLVER tells the story of how and what moved Voorman to draw the now iconic, possibly influenced by Aubrey Beardsley pen and ink black and white cover—visually a polar opposite of Rubber Soul's inviting warmth.

Upon Revolver's August, 1966 release but four months after the group entered the studio to begin recording it, the sonic and visual correlation was clear. Despite containing some of the group's warmest compositions including "Here, There and Everywhere" (McCartney says in the annotation it's probably his favorite tune), "Good Day Sunshine" (influenced by The Lovin' Spoonful's "Daydream") and the whimsical "Yellow Submarine", the album's sound is as cold and monochromatic as Voorman's perfectly expressed cover art. Attempting a remix warm-up would have been beside the point and everyone involved avoided that.

The question in need of an answer is, did this album really require a remix? Recorded to four track 1" tape and utilizing many track bounces, all of which is brilliantly covered in the song by song annotation, the end result is a "stereo" mix typical of the time, with many instruments crowded into single channel pre-mixes—much like what Tom Dowd did over at Atlantic with many jazz albums. Coltrane's My Favorite Things, for example puts Coltrane and bassist Steve Davis hard right and McCoy Tyner and much of Elvin Jones's drum kit hard left. Fortunately some leakage spreads some of the kit—especially the snare— to the center, but this recording is hardly "stereo".

On Revolver, as Giles Martin pointed out in the recent press conference, for "Taxman", which opens the record but was commenced April 20th, 1966 following the recording and mixing of "And Your Bird Can Sing", the instrumental backing of bass, drums and guitar was laid down to a single track. Later, George sang lead, with Paul harmonizing and that was laid down to track three and then repeated and placed on track four. Tambourine was later added to track two, along with a Harrison guitar riff and also Paul's blistering, memorable solo. Other elements added to track two were deleted the next day, when vocals on tracks three and four were combined to create a single track on another four track tape so more elements could be added, including Ringo's cowbell and the references to British politicians Wilson and Heath. And so it went in those four track days.

The result is what you've heard in the stereo mix for many decades, just as many of us heard a similar but more easily created "stereo" mix on the Coltrane record. Are either of these "stereo" mixes terrible? No. In fact, the Revolver stereo mix is serviceable, and still great, despite some noticeable glitches like the double tracked vocal on "Eleanor Rigby" that was not reduced in time to a single voice at the song's beginning. How engineer Ken Townsend invented a means by which there could be double tracking vocals without actually recording it twice is but one of the endlessly fascinating stories told in the book, which itself is worth the price of the box. It's truly sensational.

Work Tapes For Listening But Not For Remixing

The pre-mixes done for this album prevented the kind of remixes that were possible for Sgt. Pepper's... and Abbey Road. As described above, the "Taxman" bass, drum and guitar part was laid down live to a single track. It was a done deal until Peter Jackson's sound team at WingNut Films Productions Ltd. devised its "Source Separation" technology, which is the audio equivalent of Photoshopping out images from a digital photograph. It works perfectly and so presented Giles Martin and his team the opportunity to separate out everything and remix Revolver, which of course is what they did.

There are two ways of looking at and listening to the remix: how effective is the new mix as a spatial representation of the record and how do the images themselves sound? I'm not going to do a forensic breakdown of the spatial choices other than to say that there's some extreme separation I found jarring. The strings on "Eleanor Rigby" for instance are sort of "left out to dry" in this new mix. They sound separated from the song, whereas they seem better integrated in the original.

I'm sure many listeners will appreciate the new mix's orderly and mostly "tidy" technocratic character that commendably avoids creating something "new and unique" and instead sticks with the original mix's spirit, but with a somewhat more spatially coherent picture.

Thankfully they didn't try to warm up what should be the sonic equivalent of Voorman's artwork, however, there remains a really and I mean really annoying quality to the images where a tambourine doesn't really sound like one but rather sounds like an apparition of one—kind of like seeing Michael Jackson's hologram at his really noisy and awfully conceived "ONE" Cirque du Soleil show at the Mandalay Bay Hotel in Las Vegas that I was required to see for my expert witness appearance in the Quincy Jones versus the estate of Michael Jackson trial. There was a hologram of Jackson that was amazing in that it kind of looked like an actual person and it was Jackson but you couldn't get to close or it wouldn't work at all and it didn't last long enough for you to see through the illusion, though actually, you could literally see through it.

The technology used to pull apart the pre-mixed elements works as claimed but it produces "shadow" unsatisfying versions of voices and instruments the way "early digital" used to but really doesn't now, otherwise the unmastered but digitized work tapes found on the bonus material would not sound so damn good (as unmastered tracks frustratingly often do). However, for some reason Paul's bass went through the process unscathed. The remix bottom end is forceful—and timbrally and texturally correct.

Simple things like that tambourine on "Taxman" or Ringo's tom hits sound real on the original stereo mix. They just don't register as real on the remix. Ringo's voice on "Yellow Submarine" is very "Ringo-ish" on the unmastered work track version of "Yellow Submarine" but something is missing on the remix. It's hard to describe or explain but if you listen to an original stereo pressing and then to the remix and Ringo sounds equally convincing on both, good for you! For me one just loses the "reality". Ditto Paul's searing guitar solo on "Taxman". Well, actually everything. It's a damn good trick that produces damn good holograms but you lose the "thing" and are left with shadows, all to produce a more tidy mix with greater instrumental separation.

Never mind that the mono mix has "extra stuff" as described in the "Mono and Stereo in 1966" chapter. More to the point is how the chapter ends (and the chapter is the finale that ends the annotation!). It says, "A mono mix is the key to unlocking how The Beatles intended record buyers to hear their music when it was made. Of course, it's not only valuable as a way to experience the authentic 1966 sound of Revolver. Even now—when stereo has reigned supreme for 50 years and spatial mixes are starting to proliferate—the powerful sound of The Beatles in mono is a thrilling way to listen to Revolver."

That is so true! Sean Magee's new all analog lacquer cut with equalization guided by Harry Moss's 1966 mastering notes (with some unspecified modifications but I bet with bottom end restored whereas the original attenuated it to avoid the dreaded "Kangaroo cut") knocks it out of the park as we say here. It's fantastic and sounds more transparent and timbrally balanced than the excellent one found in the 2014 box that for some ridiculous reason or reasons is no longer in print.

Listen to the mono mix and you will hear that tambourine sounding more like one and Ringo sounding more like Ringo and Paul's guitar sizzling and searing on "Taxman" and generally everything having life and body and weight instead of sounding and looking like a hologram. Yes, the lateral spread is way diminished (though you are not looking into a tunnel) but the layering into three dimensional space is way enhanced and so skillfully presented—as originally intended—so that you definitely hear more detail, more layering and more for both the ear and eye to process and enjoy.

The physical presentation—the way the book's layout, photography and of course the annotation itself is indispensible for Beatles fans. And the vinyl pressing done at GZ Media is also outstanding: quiet, flat 180g black records. And by the way, for whatever reason or reasons, maybe sample rate conversion to CD, the CD box doesn't sound nearly as good as the vinyl. What was annoying on the vinyl re-mix is even moreso on the CDs.

Revolver was an "inflection" album. It introduced to the mainstream, psychedelia (and inferred the use of psychedelic drugs), world music, even elements of prog rock and avant-garde classical, as well as new ways of using the recording studio at a time when an older world was evaporating and a new one forming—even though the old one fought hard musically and politically to dominate (and actually did— Revolver airplay was suppressed because of John Lennon's misinterpreted but true comment that the group was more popular than Jesus). For many, it not Sgt. Peppers... is the group's best and most important album.

That's my opinion and at least for me, it fully justifies this lavish and brilliantly annotated set that for many weeks now I've been reading, listening to and exploring . You can research how songs were written, performed and produced as well as much that occurred on the sidelines during this exciting period of time musically and culturally. It even explores the Yesterday and Today cover controversy and delves into mixes created specifically for that record, which was released before the actual album that in the American version omitted three songs. You can read in minute and always fascinating detail how things put to tape came to be and whether or not you like the new mix, there's the new, well-pressed mono original. This may not be the most successful re-mix but it surely is the most successful presentation and packaging of a Beatles album in the 21st century. Project Producers Jonathan Clyde and Guy Hayden deserve a special shout out for this effort. Of course the box is most highly recommended to Beatles fans. If you're one, you'll be reading and experiencing Revolver with a new perspective on every tune, on the album itself and on the Beatles individually and as a group that continues to defy time.